In the glory of Australia’s Sunshine Coast, I had hoped to get up close and personal with humpback whales. Locals told me they were passing through daily – breaching, frolicking and generally having fun.

Unfortunately,Wally and his mates were a tad shy the day I went. Australia’s Sunshine Coast.  Celebrating its 50th anniversary under this banner recently, t 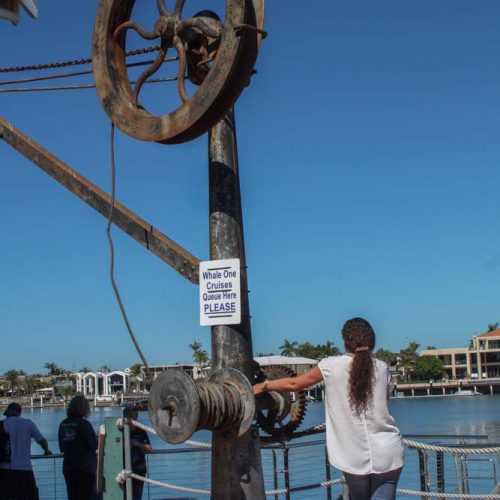 his exquisite tropical coastline was developed much earlier of course. It’s just that after people caught up with its glorious lifestyle – the onslaught has been rapid.

Humpback whales have cruised these parts far longer, of course. Queensland’s balmy waters are a playground for these magnificent giants as they calve before heading back to the Antarctic. From July to November, these migratory creatures put on spectacular displays each day. Except my day.  It’s not that I didn’t see them. Blowhole puffs could be spotted on the horizon every so often. As the boat steamed in for a close encounter, the curved hump of dorsal fins highlighted there were pods around. They just weren’t playing ball that day. Wind? Water?  Who knows?   Perhaps it was just the whales’ whimsy.

In the ‘always-take-something-good-out-the-experience’ concept – the trip was actually very enjoyable. There’s nothing like wind in your face, ocean spray in the air and the rolling of a double decker catamaran to stir the stomach.  Sea sickness pills were advised from the outset. Personally I figured it might have been an added-value clip of the bus ticket.  Bottled water was also on sale to wash the crusty things down! Nothing was going to spoil the

moment.  Make the most of the company I always say. And there was a diverse bunch around me. People from Colombia, South Africa, Germany, Lebanon – anywhere and everywhere. All on a common mission – to see humpbacks. Just one will do.

Anyone too queasy for an ocean outing can see the whales from land. It’s free for starters. Of around six points along the Sunshine Coast, Point Berry off Coolum is considered the best. It’s just that the hope of seeing these gentle giants up close and personal is too good to pass by. It’s inconceivable knowing they were being slaughtered right up to the mid 60s.  When whaling was banned – around 40,000 had been killed – a mere 400 estimated in existence. Thankfully, they have recovered strongly. According to Mooloolaba operator Whale One, numbers increased to approximately 13,000 by 2011 and have been growing by about 11 percent every year. 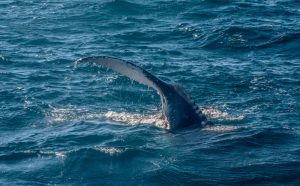 As the most acrobatic of all whales – if lucky enough to view them – their antics are staggering. Breaching is undoubtedly the most spectacular sight – these massive animals hauling high out of the water and slapping themselves on the way down.  Do they do it to loosen skin parasites – or just for fun?  Who knows?  Are they aware people are watching?  Skipper John Matterson says you bet.  On a good day, when his boat shimmies up near the pods, the whales may decide to investigate, turn playful and put on a show.  Spy-hopping could be a case in point. Poking their heads out of the water for several seconds, it’s easy to believe the whales are simply eyeing humans up and wondering what all the fuss is about.

Of all the whales in the world’s oceans, the humpback undoubtedly is the noblest.  They are an enigma. Heavenly even; given they are the first creature mentioned in the Bible, Genesis: 21. We are blessed to cherish even a sliver of their presence. On the day I went to see them – after about three hours spotting – a couple perhaps decided they had given us enough run around. After cruising over, they flashed some tail – one even cheekily dipping, as if acknowledgement of a bid farewell.

And then they were gone. 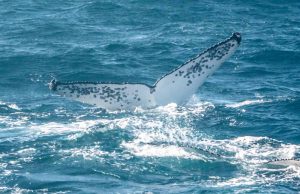