Riding Queenstown’s gondola is one thing.  Mt Ruapehu’s new Sky Waka however, is a whole new level. It has opened up amazing opportunities – particularly for non-skiers, like myself. In creating this gateway to one of New Zealand’s iconic mountains, it allows more people to journey into the clouds and see first-hand why skiers and snowboarders are addicted to the thrill of ploughing downhill at speed through fluffy white powder– preferably fresh. Preferably no-one around either – especially on those gnarly off-trail areas. 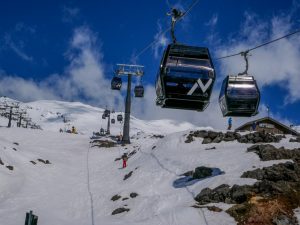 The Sky Waka gondola is a masterpiece in engineering, logistics and vision. Photos of its construction on Mt Ruapehu’s web site are fascinating in themselves.   And, while riding a gondola isn’t a new experience by any means, there is something about travelling up this mountain to share its magic.

Having only stood on Ruapehu once –  first attempts at skiing were; to put it mildly, pathetic.  Never to be attempted again.  Thirty years on, the only way up past the car park – was by gondola.  So, when the family headed off for a long weekend, it was a great opportunity to meet the clan for a day on the mountain, riding Sky Waka and watching the troops at play.

Sky Waka is an apt name – given the significance of Ruapehu to Maori.   Mt Ruapehu’s 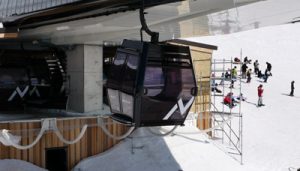 website explains it thus: “As the highest and longest gondola upon Te Ika a Maui, this is more than a machine. It is a vessel to bring people together, to elevate them, together, upon this great maunga. It is a thread, weaving earth and sky.”  Nicely put. 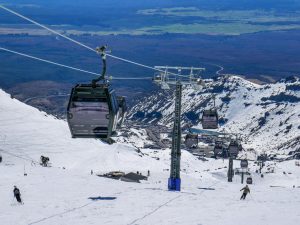 As a celebration of the waka, this new feature is seen as a future symbolism of ascending an ancient mountain. And ascend it does – rising 1.8 kilometres through the spectacular landscape of volcanic Mt Ruapehu. The journey begins at the Bruce Road base – gondolas travelling up to the Knoll Ridge Chalet, 2020 metres above sea level.  At peak times Sky Waka is capable of transporting 2400 people each hour in approximately five minutes.

There are 50 cabins – floor-to-ceiling glass for seamless views.  Skiers might like to note they come with internal ski racks, audio, lighting and leather seats.  Each cabin accommodates 10 passengers and even the tallest skiers can stand up!

At the time of its grand opening in July, Ruapehu Alpine Lifts CEO Ross Copland said that Sky Waka was one of a kind and would transform the mountain visitor experience and lift it to a whole new level.

All true. For the uninitiated however, a few tips might be order. Particularly on a sublime 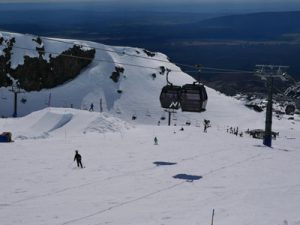 winter’s day with crystal-clear skies, calm air and fresh snow. Seasoned skiers and snowboarders scrutinise the weather almost to the minute – ready at the drop of a hat to hit the slopes. Naturally, that means crowds. And with crowds, come congestion – as in traffic.

Following the cause-and-effect decree – that means car parking space becomes a precious commodity.  Arrive early, or be prepared to be greeted by the “road closed ahead” sign flashing ominously; even before passing the Chateau – a warning that all parks up at the skifield are full. 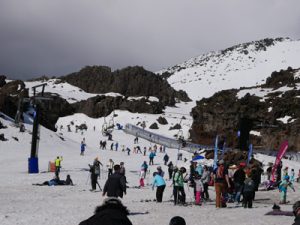 Stopping at Whakapapa Village a few metres on – again; if you can find a park – shuttle buses will ferry passengers from the i-Site during peak season.  On a perfect day, arriving anywhere after 11am can be testing.  It doesn’t take long for late-arrival skiers, with their conglomeration of gear, to become frustrated.

Another tip. There are a couple of operations running half-hourly up the winding road to the Bruce Road base – home to Happy Valley, cafe and Sky Waka. It means colour-coded tickets for the relevant shuttle – bought at the i-Site.  Be prepared to fork out the dosh, by the way:  one return shuttle $20; Sky Waka, $49 adults; $29 kids up to 17 – one round ride.

Is it worth it? You bet. Nothing about a trip to the snow caters to anyone with long pockets 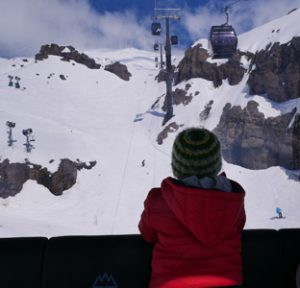 and short arms. But when youngsters are involved – it beats the A&P Show by miles.  On a clear day – sitting outside the restaurant, gazing over the Pinnacles and valley below – it’s bliss; wrapped in woollies and the embrace of this magnificent mountain.  One only hopes Mt Ruapehu doesn’t rumble under the weight of all those who gravitate towards it. Plenty more now, thanks to Sky Waka – and the opportunity that will extend through summer for a different view of this UNESCO World Heritage site.

One can only hope visitors take time to appreciate their good fortune to stand on this mountain and be humble enough to value it.   Mt Ruapehu is there to share. More importantly: to be treated with care and respect.