Sometimes it pays not to research an area after agreeing to a cycle trail – particularly if it involves heights and sharp gradients.

The word gorge should have been a clue – a polite term for canyon or chasm, by definition. Not being a hard-core mountain biker, familiarity with New Zealand’s great trails isn’t my strong point.  Just as well.  Combined with the fact Christmas, New Year and family birthdays took priority, the trip was simply shelved in the diary once I signed up. Friends had mooted the trip months out. Having cycled with two of them before – older than me, I hasten to add – logic told me: How hard could it be? 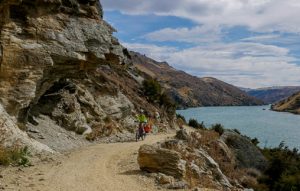 Quite hard, as it turns out – if vertigo is added to the equation. The newcomer to our intrepid foursome was a friend of one of our troupe – also blissfully unaware of the actual corridor we were about to undertake.  Half way into it, we both agreed; had we known what the path entailed, we might have re-negged. 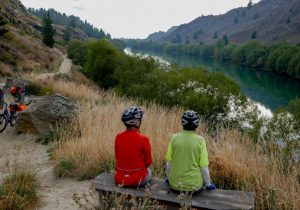 Thankfully, no. The sense of achievement cannot be overstated. Of New Zealand’s 22 great cycle trails, Roxburgh Gorge is among the best – regarded as one of the country’s most visually spectacular day rides. nzcycletrail.com describes it thus: ‘Sometimes close to the water’s edge, sometimes high above it, the trail follows the mighty Clutha Mata-au River through an otherworldly gorge. Its dry, eroded bluffs are a stark contrast to the vibrant willow, thyme and hardy native shrubs that change colour with each season, and of course the surreal blue waters of the swirling river.’

All true. It just omits a couple of finer points, however.  Fortunately! The scenery is best admired off the bike; not gazing at it or looking down to the water while pedalling. Having undergone a subsequent project on my house that required extensive scaffolding to meet health and safety requirements for roofers, builders and painters; I was bemused seeing it erected.

The Roxburgh trail doesn’t worry about heights. Up to 350 metres in place, it exalts them. Railings sit on just one point – a tight, three-point-turn during a section dubbed ‘The Narrows’.  Loose definition?  Goat track, single file, sharp turns – all downhill; or uphill if biking vice versa.  Heaven forbid cyclists meet midway. Mostly, the trail is 2.5 metres wide. However, parts still zig zag to scale the gradients, hover close to eroded bluffs and skirt blind corners.  While all  information promotes this trail’s relative ease, one sign does offer a quirky take on safety. It highlights the steep incline ahead with ‘stick man’ going head over the handlebars! 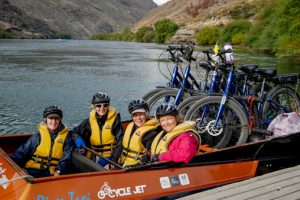 Running between Alexandra and the Roxburgh hydro dam, this trail covers 34 kilometres – including a 12-kilometre jet boat ride.  It doesn’t have to be tackled on a bike.  Walking all, or part, is another option – particularly if you want to savour the views.  We started in Alexandra.  A couple of nights stay there is a good idea, thanks to its connection with the Otago Rail Trail and loops around town.   A flat, 17-kilometre ride out to Chatto Creek and the tavern is a nice outing. Another pleasant jaunt runs to Clyde and lunch in the historic heritage precinct.

The Roxburgh Gorge Trail begins by the town’s historic bridge towers on the Clutha Mata-au River – the entree to what follows. The trail is rated two to three – easy to intermediate. I could question that, but whatever.  Not even contemplating it without an e-bike; my final humiliation was meeting a delightful woman later who rode it at 81 – on an ordinary bike!  I am officially a wimp.

Eight years in the making and seven years young, this trail unveils a part of New Zealand not

seen by most.  Stark, dramatic and exquisitely beautiful, it aches with history.  To discover this – the jet boat section is a revelation.  Dave Crawford of Beaumont Jet has plied this river for decades.  Constantly finding new points of interest, old cave dwellings and mining relics, he weaves a fascinating story behind the gold rush days of the 1860s. It’s humbling and inspirational. What these diggers achieved is overwhelming; let alone how they survived the 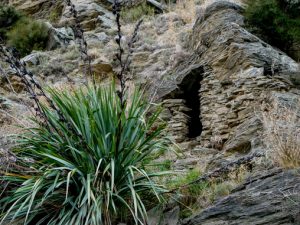 brutal winters. Even if you’re not a cyclist – this trip is worth the thrill.  As a taxi for trail riders, Dave covers a stretch where no path exists – and won’t for some years yet.  Health and safety probably!

The trail ends at Roxburgh hydro dam. Cross it and you’ll start the Clutha Gold Trail – equally fascinating in its history and a gentle cruise by the river to Lawrence and the birth of New Zealand’s gold rush: Gabriel’s Gully.

But that’s another story