When friends from Gisborne, Napier and Tauranga looked to catch up for their annual get together, Rotorua came up trumps.  For several reasons. 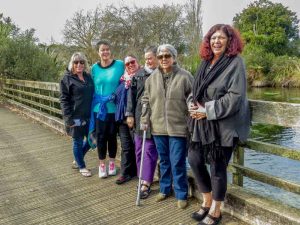 Living less than an hour from Rotorua for some years now, you’d think a jaunt to this tourist mecca every so often would be in the diary!  Sadly, it took suggestion my Gizzy friends to make Rotorua the destination for the annual girls’ soiree.

Can I say from the outset – all hail to the head honcho who devised the idea. The fact the usual group of 11 was reduced to eight might have had something to do with it.  Close-knit accommodation for 11 women is not that easy to come by. Eight however, fits very nicely into two interconnecting rooms at Rydges Hotel. Tip number one.

Tip number two: Try for a deal and tick the breakfast box. The morning buffet includes everything from smoothie shots, fresh fruits, yoghurt and cereal to a full-blown English breakfast – croissants thrown in for added indulgence – chocolate laced if you’re really lucky.  For the truly insatiable – the pancake machine will also whip up a couple of calorie-laden delicacies to wash down with coffee, tea, or minted water. 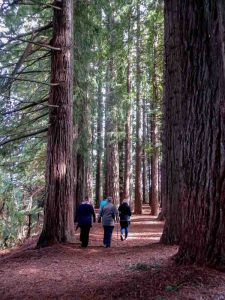 Understandably, an attempt at exercise is the pay-back. In Rotorua you are spoilt for choice, though. Naturally, the famed Redwood Forest was on the tick-list – the new ‘treewalk’ being the drawcard.   We planned to do it at night however. So with a day to fill in beforehand, the other – perhaps lesser known – Redwoods Memorial Grove was the first trek. Based at the Hamurana Spring Recreational Reserve, this park is on the other side of Lake Rotorua – on the road that swings back to Tauranga.  Easily passed, it pays to look for the golf club, rather than any sign.

It was a revelation. The 20-minute walk – depending on photographic stops – meanders through an awe-inspiring grove of magnificent redwoods. It’s a gentle stroll – easily handled – even by the less able-bodied. The reserve has been under the watchful eyes of the Hamurana Springs Incorporated Society since 2003, when volunteers set about restoring, enhancing and maintaining this natural environment. 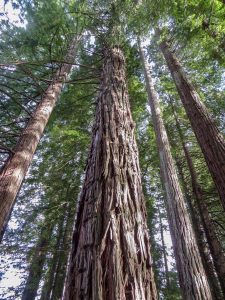 world’s oldest known redwoods that clock in around 2200 years. While not native to New Zealand, they are worthy of their standing and Rotorua is certainly the better for them.  As to the spring itself – Te Puna-a-Hangarua – it was another revelation discovering it’s the largest in the North Island.

Named after Hangarua, a chieftainess of Ngati Rangiwewehi, it was the lair of Hinerua, the kaitiaki taniwha. The spring’s water travels down from the Mamaku plateau through underground aquifers – a journey that takes 70 years. From there, water flows into the Kaikaitahuna River, into Lake Rotorua, through the Ohau Channel into Lake Rotoiti to tumble over Okere Falls and down the Kaituna River to the Pacific Ocean at Maketu, the landing of the Arawa canoe in 1350.

Sitting 280 metres above sea level, the spring is about 15 metres deep and a constant 10 degrees C.  Staggeringly, around 4,500 litres of water flow out the spring each hour – enough to fill two Olympic sized swimming pools! 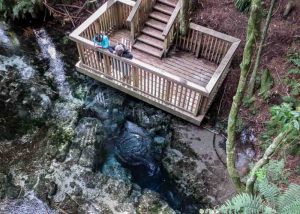 The spring’s pristine clarity is mesmerising.  The temptation to toss coins into its core is irresistible and many can be seen glittering on rocks below the surface.  A sign points out that back in 1957, more than 5000 pennies dating from around 1860 were recovered by pioneer skin divers. There’s no evidence of if any being recovered since!

Fascinating as this was by day, the night walk amid treetops 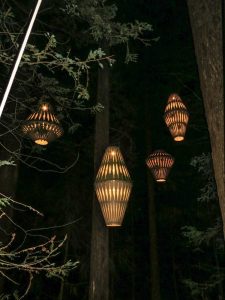 in the better known Redwood Forest was spellbinding – albeit it a tad daunting for anyone with vertigo.  At over half a kilometre, it is the world’s longest ‘living tree’ walk.  Comprising a series of suspension bridges and living decks between 23 Californian redwoods up to 12 metres high, it’s an extraordinary view of the forest and undergrowth. The lanterns – made by renowned lighting designer David Trubridge – are suspended throughout the walk, along with multiple coloured spot lights. It is truly unique and attracts people in droves. 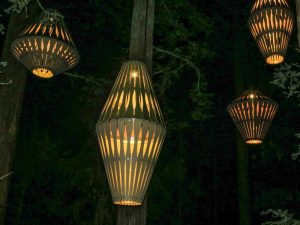 First plantings of these stately trees date back to 1901 with forestry in mind.  Redwood Grove as it was called then was declared a memorial in 1925 to commemorate NZ Forest Service members who died in World War I. It wasn’t until 1975 however, that the forest was officially designated a Forest Park under the Forests Act. There is so much here to discover – not just the park’s history, but its varied recreational value and sheer majesty.