Discovering New Zealand’s back yard has been on the agenda for several years – especially the South Island. One trip involved travelling east to west and back again – taking the train and returning by car to see Arthur’s Pass from different perspectives. Having watched the sights by rail on the trip to the West Coast, the rental was ready and waiting at Greymouth. First stop was to turn right and head up the coast to Punakaiki – 46 kms up a rugged coastline to the famous pancake rocks. 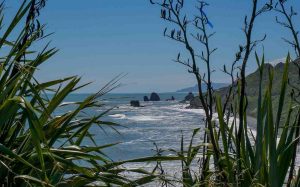 The term rocks is an understatement really. They’re more like towering tiers of craggy cliffs. Sitting at Dolomite Point, these limestone formations began developing 30 million years ago from lime-rich fragments of dead marine creatures, deposited on the seabed. These were  later overlaid by layers of soft mud and clay. Over time, earthquakes lifted them from the seabed to the level seen today. That’s a short version of a freak of nature that took millions of years to create. 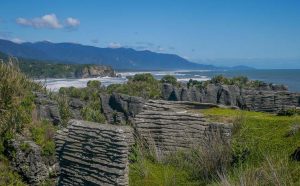 The term ‘pancake’ becomes evident when looking at the formations close up. Layers upon layers of limestone comprise tiny shell fragments; separated from the next layer above and below by a thin layer of siltstone. 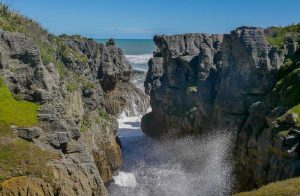 Mother Nature is a wondrous artist – her sculpting tools being the rain, wind and sea spray. The result has etched the softer siltstone into nearly-horizontal grooves, rounding the edges of limestone layers to form the illusion of a stack of pancakes. Something my grandchildren will hopefully appreciate in years to come – pancakes being their favourite Sunday breakfast – layered with lemon and sugar. 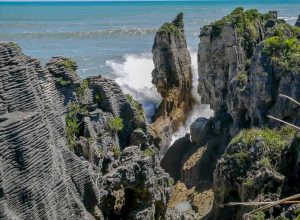 The other fascinating aspect of this particular point is the maze of underground passages and open caverns. Facing the sea, these take the full brunt of the harsh West Coast swell. 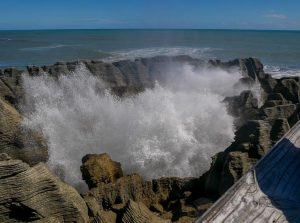 At high tide, when the ocean surges into these caverns, water gushes up the passages. Huge geysers burst skywards in gay abandon all around. When there’s a big sea, the blowholes are dazzling. Without knowing anything about these rocks, my timing couldn’t have been better. Right on high tide and a brilliant day. It was mesmerising seeing rainbow cloudbursts from surging swells catapulting into the air. 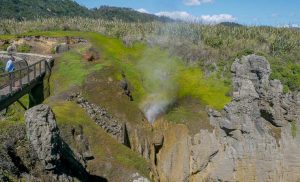 Entrance to the rocks is right opposite the Department of Conservation Paparoa Park Visitor Centre on SH6. There’s parking, a café to dine in style, together with a sports gear store and gift shop. Set within the 30,000-hectare Paparoa National Park, the Paparoa and Pike29 Memorial tracks are among New Zealand’s newest great walks. Designed more for serious walkers or mountain bikers, these tracks cross the Paparoa Range through alpine tops, limestone karst landscapes and rainforest. 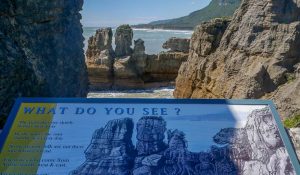 For lightweights like myself however, the 1.1km easy-loop meander around Dolomite Point marvelling at the Pancake Rocks and Blowholes was sufficient, thanks very much. Firstly, it’s free. Secondly, it takes as little or as long as you want to stop and simply marvel at the amazing sights. Thirdly – well, they are just so accessible. Virtually off the main road.

Be sure to time your visit around high tide, though. The sight of water catapulting into the air and up the various rock faces and cavernous hollows is spectacular and mesmerising.

If you want to check out more details, visit these sites for more information.