Taking it on the chin,  I confess my map-reading incompetence while walking Picton’s Snout Track 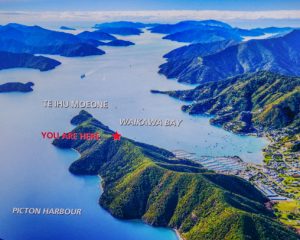 Anyone who knows me will agree that lengthy walks aren’t really my forte. They take too long, for starters. Hikes are worse.  Lugging packs for hours on end – it just isn’t in my radar. It’s not that I don’t like walking, or the bush.  I have nothing to prove. I simply don’t enjoy the time involved, or the exertion if I’m honest.  Which is why it’s incomprehensible that I would listen to a friendly Picton motelier?  Having never been there, I was keen to explore the place – but with no set plans, I preferred to wing it.    .

Said motelier – as I found out later; a volunteer conservation dog patroller – suggested the 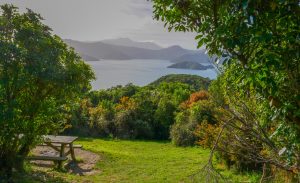 Snout Track. Of course she would! Named after its shape and loose translation of its Maori name, Ihumoeone, this long arm stretches from Picton harbour into Queen Charlotte Sound to a narrow tip. Close to town and, with a network of walks and bike trails throughout the domain, it’s obvious for short-term visitors. A quick meander around the bay and up the hill might have been wiser, rather than a full hike to The Snout. Reading Trip Advisor prior would have helped any confusion.  Map reading isn’t my strong feature either. All that aside, I doggedly chose the long option. Armed with a local map from the motel, and prepared for three hours admiring the scenery, I drove to what I deemed was the starting point. 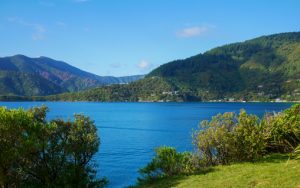 I blame the dogs.  Or was it the owner of one rebel hooning around, escaping its owner’s calls. Map in hand and asking directions after she had finally reined in her dog, the woman suggested I tag along as she was heading that way.  In hindsight, I doubt she noticed my arrival by car. A small back pack and sturdy boots might have given rise to thinking I was a serious hiker.

Led up a precipitous path – known only to her probably – we arrived at point where she left me with directions to The Snout. Unfortunately, after reaching a fork in the bush, confusion reared its head again. Enter another couple of dog owners – equally helpful, more pointers and warnings about mountain bikers.

This full trek to The Snout is deemed moderate, albeit it steep in places – and muddy in winter apparently.  More of a bush walk, views aren’t readily blatant, until the three-quarter mark around an hour away at Queen Charlotte View Lookout. It’s a nice pit-stop and somewhere to decide whether to plod another 40 minutes to the end.  In for a penny, in for a pound – I’m never doing it again anyway. Photographic evidence was required – proof for the kids back here.  Forty-five minutes later – noting the steep steps downhill meant an arduous haul back up – mission accomplished. 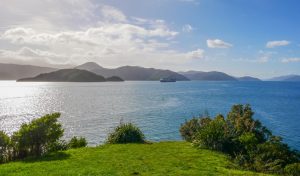 Suffice to say, the view is worth it –as with everything in the Marlborough Sounds. The Snout is a wonderful spot to watch the inter-island ferries chug by and enjoy nature.  Taking time to soak it all in, others arrived and left – a friendly bevy of bikers, hikers and overseas tourists.  The headland doesn’t exactly cater for crowds – and, if fear of heights is an issue, keep well away from the sharp drop at the tip. 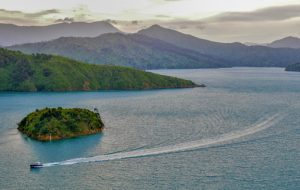 Reaching a destination is one thing.  However, it usually means a return journey – another mute point, which exposed my limitation on map reading. Finding the correct path back needs an explanation.

Searching for the garden path I had been led up – stupid really, except for the car somewhere below – I wound up on yet another wrong track; notching up an extra 5kms, at least.  Imagine the horror later, learning that the park I had stopped at was actually a mere playground reserve. For dogs, obviously!  The official Snout Track car park winds uphill from this lower area to brilliant lookouts and an easy doddle to the track’s actual start point. On closer inspection later – this is clearly marked on the map!  What should have been a three-hour walk took all day –up hill, down dale, wrong routes and countless unprintable words.

On the positive side, getting lost is not an issue. Tracks throughout the domain all interlink. 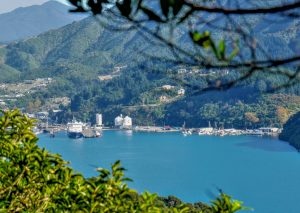 It’s a bit of a maze, offering walkers and mountain bikers great variety – from short strolls around the harbour to this longest trek. By the guide; just short of 8 kilometres round trip. My route – probably more like 15!

Sitting back in the motel, sipping several well-deserved wines, I thought of the charming young chap who had sat beside me on the plane down south.  Sent on a three-week outward bound course by his boss to Anikiwa nearby, I wondered how this self-confessed city boy was coping.

It also confirmed why I don’t do long hikes – let alone outward bound.

25-minute drive from Blenheim airport, or by inter island ferry