With several New Zealand places on the ‘must-do’ list, I discovered there’s much more to the South Island’s fish hook and a simple life in Collingwood.

While doing some research prior to ticking Farewell Spit off my bucket-list of  exploits, the first question 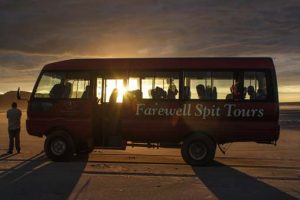 was deciding where to bunk down for couple of days. Admitting to scant knowledge about Golden Bay, it was a revelation discovering Collingwood is home to the only remaining tour group permitted to the lighthouse – and has been for more than 70 years. What began as mail delivery to the light keepers, morphed into a full-blown tourist venture – thanks initially to visitors simply asking to hop on the rickety, flat-deck lorry.

Today, Farewell Spit Eco Tour’s fleet of 4WD buses make light of the trip. It requires solid navigation skills and sound driving ability.  This bar changes daily. Like the sands of time, the dunes are constantly on the move; the beach always different. From soft spots, tides, water holes to wind; Farewell Spit is formidable.  At around 35 kilometres long, it’s the world’s fourth longest natural sandbar. The longest spit in New Zealand, it was also regarded as the country’s hardest watch when the first lighthouse was built in 1870. 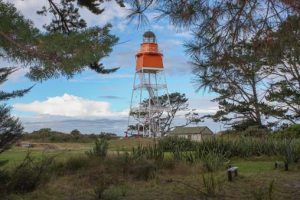 Built of timber, it rapidly decayed with the elements. The current lighthouse is the third – similar lattice design to withstand strong winds; but built from steel. After years of being home to light keepers and their families – first three, then two, then one couple – the lighthouse was finally automated in 1984. Now monitored remotely from Maritime New Zealand in Wellington; they, along with DOC and Farewell Spit Eco Tours, are the only groups allowed to this lighthouse.

Exploring the compound and cottages, it’s hard to comprehend what life must have been like establishing this desolate community. Once completely devoid of vegetation, the site now embraces groves of landmark trees, bushes and grass. Animals grazed here – livestock and chickens needed to feed the light keepers and their families. The entire spit was even farmed once – up to the 1930s when remaining cattle were finally shot – only after several thwarted attempts to drove the wild beasts off the bar.

Farewell Spit is extraordinary – yet just one element of an equally extraordinary tour of discovery.  Bang for buck – this trip is a must do. Depending on the tide and seasons; buses leave Collingwood most days. Taking six and a half hours or more, guides like Tony and Charles give a running commentary as the bus chugs through Golden Bay’s villages and over 14 waterways; past wading birds and cockle beds to Puponga. 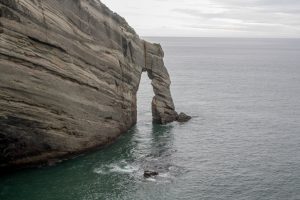 Stopping at Cape Farewell, we learn about this working farm. At 1021 hectares, the Puponga Farm Park 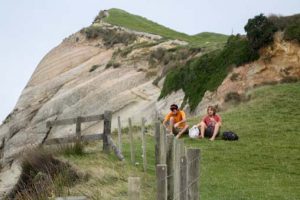 A bird’s eye view of the spit’s big fish hook is deceptive. Cape Farewell, rather than the actual tip, is the South Island’s most northern point. First seen by Abel Tasman in 1642, it was Captain Cook’s last sighting in 1770 – hence its name. Neither of them left actual footprints in history. Maori on the other hand 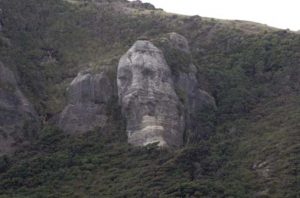 inhabited the spit in the 1600s, calling this place Onetahua – heaped up sand. Still young by history’s standards; the nearby Old Man Ranges for example – named after a lone bare rock – are around 50 million years old.

Told the current spit is about the fourth or fifth formation, it’s fascinating to learn the quartz sand along this sandbar drifts from the tops of the Southern Alps. Calm on my visit, Farewell Spit can howl with wind – blowing 240 days of the year – at times so windswept, it is easy to become disorientated. Little wonder, mariners feared this sandbar.

Whale strandings have happened for years – though the stranding in 2017 was  ranked among the biggest.  Around 416 were found floating early in the morning – more than 250 already dead. Thanks to the massive public input, about half were saved.

While whales are infrequent visitors, Farewell Spit is a wetland of international importance – home to a rare sea-level gannet colony, seals and a myriad of birds – over 90 species having been recorded there.  Godwits are particularly cherished – taking just eight days to fly 11,000 kilometres non-stop from Alaska – the longest non-stop flight undertaken by any bird. Returning to Alaska via a different route from March into April, they stop over several times between Australia and the Yellow Sea off South Korea to arrive in good condition for breeding in May.

Farewell Spit is an absorbing place – a vast ribbon of sand, wind and water – as exquisitely beautiful at sunrise and sunset as it can be dangerously unforgiving to its inhabitants. It is a place where 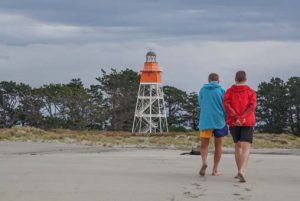 cell phones have no place, other than taking photos. Leaving only footprints – even these are swept away with the tide each day. Farewell – and thanks for the memory.

First shone June 17, 1870.  Now fully automated, the current lighthouse is the third, steel latticework, 27m high and 30m above sea level.  The light flashes once every 15 seconds; seen 19 nautical miles (35kms) through the clear glass and 15 nautical (27kms) through the red glass.