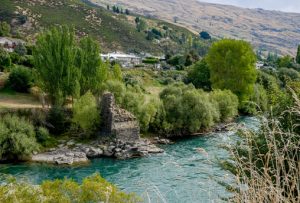 If someone asked you where New Zealand’s gold rush began – would Lawrence pop into mind? Gabriel’s Gully might have been lodged somewhere in the memory bank, but asked to pinpoint it on the map – I might as well have been blindfolded and playing pin the tail on the donkey. Otago always seemed sufficient.

Tackling the Otago Rail Trail years ago with a bunch of Gizzy women was also my blind initiation to long-distance cycling.  Biking to school had been the extent of my pedal pushing prior to that.  While not an avid convert to trails, I have managed to tick off a few since – the most recent being the Roxburgh Gorge and the Clutha Gold – on an e-bike I should add.

Both are trails in their own right. Joining back-to-back, however, they’re worth doing 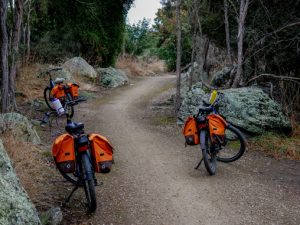 together. It makes the flight south worth the expense; extends the holiday and gives purpose to discovering the small towns that hinged their settlements on gold.

While gold was first discovered in the nearby Tuapeka River, it was Gabriel Read’s find in May 1861 at the gully named after him, that started Central Otago’s official gold rush. It was beyond expectation. Lawrence’s population catapulted from almost nothing to around 11,500 within a year, twice that of Dunedin at the time. 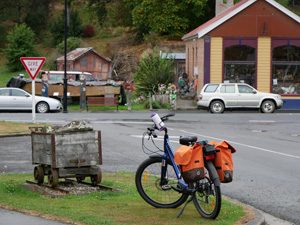 Today, Lawrence is home to less than 450. Clinging fiercely to its gold mining heritage, the town is dotted with timber figurines and plaques honouring its Victorian pioneers. Apparently, Lawrence was also the first to offer free wifi in New Zealand. It’s where music for the national anthem was composed and where the country’s first ever bike was built – which ties in nicely with the cycle trail. The museum is also fascinating. As for Gabriel’s Gully; a pick-and-shovel memorial is the only real evidence of Godzone’s gold rush.  Once scarred by the ruthless scavenge for this precious metal, the area today is rolling pasture.

Lawrence can be the start – or end – of the Clutha Gold Trail.  As a bike ride it’s a gentle cruise; mostly along the riverbanks of the Clutha Mata-au. From Lawrence to the Roxburgh dam, 73 kilometres away, the ride can be done in a day – and is, by locals.  For visitors, it’s better enjoyed over a couple of days.

Having completed the more spectacular Roxburgh Gorge Trail, the Clutha Gold was a breeze. Its leafy meander beside the river is a joyride; the rushing water mesmerising and pristine. Vantage points are numerous – probably none better than the historic bridge at Horseshoe Bend. Once a busy gold mining community, its population dwindled as the rush began to dwindle. 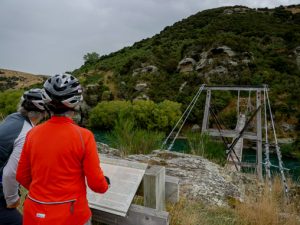 The bridge carries quite a story and, at 70 metres long, is now recognised as a significant heritage engineering structure.   It’s a bit of a walk from the trail to reach it – but it’s a welcome break from the bikes and worth seeing.  Also worth visiting are the Lonely Graves nearby – a tale of myth and whimsy about an unknown man – his grave marked as ‘Somebody’s Darling Lies Buried Here.”  Beside it, a second headstone acknowledges the man who buried ‘Mr Unknown’ – his own headstone reading ‘Here lies the body of William Rigney, the man who buried Somebody’s Darling’. 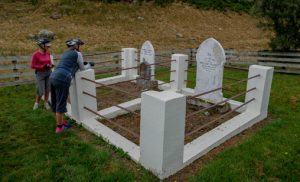 Clutha Gold is dotted with information boards – chapters from history that interweave fascinating revelations about the places, its people, their journeys and how the landscape has evolved since the giddy days of gold.

The trail is mostly flat – the only steep section taking in Big Hill Tunnel. This old rail tunnel – at 432 metres long – is a landmark section; to be walked by torchlight.  Other highlights include the restoration of Lawrence’s historic Chinese Camp, along with old country taverns at Beaumont and Miller’s Flat further out. 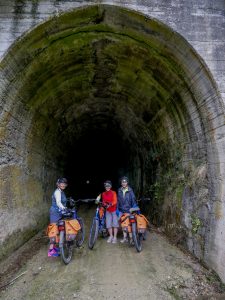 Both are worth a stop for refreshments or a night’s stay. The Beaumont was re-opened a few years ago by new owners and is currently being restored. For a five-star break, the new Mata-Au Lodge on the river’s edge is definitely worth staying. It would be easy to pass Beaumont by.  With little there – apart from the hotel, old bridge, accommodation and supposedly a population in single figures – you could be forgiven for overlooking it.  But it’s worth the food and lodgings.

Roxburgh also offers good accommodation and several quaint eating places. While not much else, that’s just the way the locals like it, thanks very much.  Like Lawrence, this is New Zealand the way it once was – no rush hour, no traffic lights, no fluster.   Could be a good place to retire.  Pity about the Otago winters!