Whale watching at Kaikoura, I discovered an ancestral link between this South Island east coast town and Whangara – another east coast settlement on the North Island 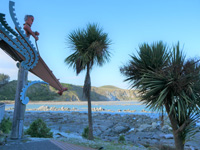 Whale Watch is quintessentially Kaikoura – owned and run by Ngati Kuri, guardians of this pristine place. Here however, Paikea is synonymous with Whangara – legend telling of his rescue at sea by the whale Tohora and taken to this small east coast bay. In time, one of his sons, Tahupotiki travelled south to found Ngai Tahu. And it’s there, on another east coast settlement, Ngati Kuri of Kaikoura claim descent from Paikea and Tahupotiki. Fitting then, that of all their boats to go whale watching, I was on Paikea.

Waiting for the perfect photograph of a whale’s tail relies on two things. Timing and luck.  It might sound simplistic – but despite every other factor, a perfect shot depends on weather, finding whales and, hopefully, a picture-perfect backdrop. 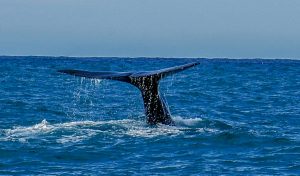 In Kaikoura, that means a crisp mountain outline – capped with snow – creased against brilliant blue sky.  One crucial aspect overrides all of this, of course – the whim of the whale. There are countless perfect shots to testify it does happen. Photographers the world over visit Kaikoura to capture the magnificence of these gentle giants. 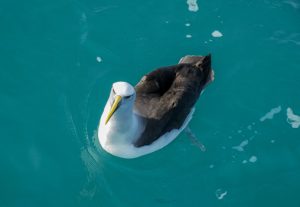 well out at sea, with only the sky as a backdrop. Patience is required as the Whale Watch crew test for tell-tale sounds from sperm whales. While filling in time waiting for any blowhole announcement – snapping a mollymawk albatross that had dropped in – Willy the Whale decided to breach.  Apparently, sperm whales rarely breach. 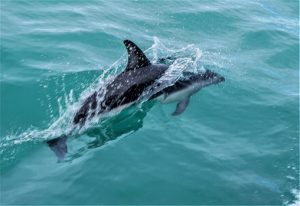 Aerial gymnastics are commonly associated with humpbacks – also spotted at Kaikoura – in winter, as they migrate north.  Orcas, Southern right and pilot whales visit as well.  For year-round whale watching however, it’s the resident sperm whales that Whale Watch sees most.  While never guaranteed, their track record is up there. It helps explain this company’s phenomenal success:  multiple award winner – all on the back of whales.

They are the pinnacle of Kaikoura’s renown, yet the majesty of the sperm whale is

particularly mind blowing. Averaging around 60 tonnes, up to 210 metres long and the world’s largest toothed predator, sperm whales reside in Kaikoura all year. Only the males mind you.  Too cold for the females, they stay in the tropics – kicking young males out. These arrive at Kaikoura – happily living in a boys’ club until maturity when they return to breed with the females. Romantic – and great news for whale watchers. 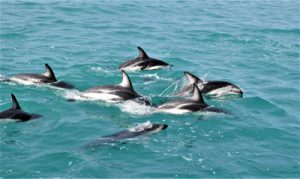 The lads stay in Kaikoura thanks to its unique coastal habitat. A mere 800 metres from land, the Kaikōura Canyon plummets three kilometres, opening up to a trench which extends far into the Pacific Ocean.  It’s a veritable marine supermarket, rich with nutrients in a chain from plankton to dolphins and whales.

Hector’s dolphin and more common dusky. They’re seen on a Whale Watch tour, but to hang out with them longer, a dedicated dolphin encounter offers snorkelling among these cheeky rascals. It’s a rare chance to get close up and personal below, as opposed to viewing the mysterious whale from above. 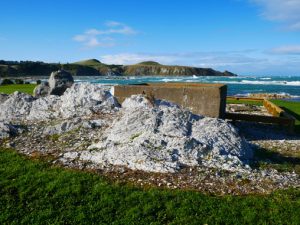 Sadly, Kaikoura was once a bastion for whale hunting – and where New Zealand’s last whale was harpooned in 1964.  In South Bay, near where Whale Watch boats reside, ruins still remain of the old whaling station. The starkness is sobering; more so when visiting Kaikoura’s museum. Among all the must dos at Kaikoura, the museum is a revelation.

Everything about this place is an eye-opener really. For starters, the beach along its 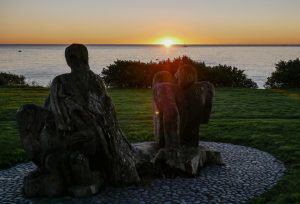 esplanade is a pebble garden.  No sand tickles the toes, just deep layers of pebbles to plough through.  Sunrises are spectacular of course. As grand as New Zealand’s first city of the sun: Gisborne’s?  Anywhere the sun rises from the sea is mesmerising to be honest.  What Gisborne doesn’t have perhaps, is a craggy mountain outline for a magical sunset. 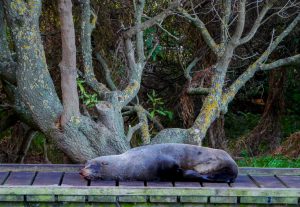 While 2016’s magnitude 7.8 earthquake changed Kaikoura’s coastline forever – raising it several metres; Mother Nature has a way of restoring life to a new type of normal. Seals have returned to Ohau Point – albeit, the walking track to the waterfall and seal pup nursery has closed.

Highway crayfish outlets might have closed, but you can still feast on crayfish at the likes of

Kaikoura’s famous Seafood BBQ Kiosk near the township.  Paua remains under public rahui, but you can still savour this delicacy too – at the likes of the historic The Pier Hotel.

I  did come away with a shot of Willy’s tail – not perfect – but certainly enriched by tales of his ancestors, and the connection of two east coast settlements. 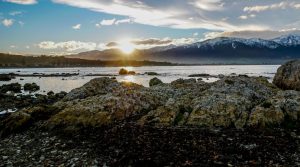