Knocking off an Australian Great Walk wasn’t exactly what I had in mind when asked to take sneakers to the Sunshine Coast. 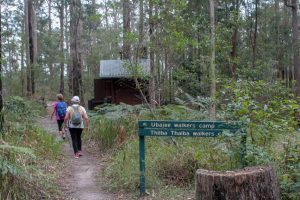 After hearing New Zealand is looking to charge overseas visitors who undertake any of its ‘Great Walks’, I almost wish Australia had thought about doing it some time ago.  Holding a pommy passport I already require a visa just to enter the place.  A charge to access a great walk would almost be a blessing – if not a possible excuse to flag it.

Suffice to say, however – photographs as proof – I have ticked an Australian Great Walk off my bucket list.  Not that it was on there. But when walking was mooted on a recent trip to mark a friend’s milestone birthday, I could hardly be a party pooper.

The memo said bring sneakers.    With Queensland’s Sunshine Coast as the destination and 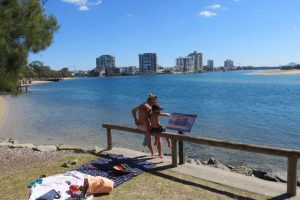 staying right by the ocean, I thought that meant strolling the exquisite shores of Maroochydore to Mooloolaba – latte and laziness as the reward.  Queensland’s famed Glass House Mountains hadn’t been mentioned, thank goodness.

However, given a 7.30am start, reality began to hit when the back backs came out, offers of walking poles were made, plus a check list of enough food and water for five hours! This was no stroll in the park.  Well, technically it was a park.  Mapleton National Park to be precise; in the boon docks of Queensland’s outback. Well, OK not quite the outback. Hinterland is the actual definition. But when maps emerged among the seasoned troopers – no-one entirely sure of which path to take; not to mention a vivid memory  between the two local leaders of getting lost the last time they were in this very park – my Kiwi cohort and I were a tad sceptical. 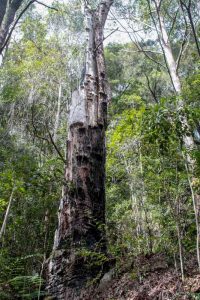 In case you’re contemplating knocking off this great walk – Mapleton National Park is up from Maroochydore on Australia’s Sunshine Coast – or roughly 105 kilometres from Brisbane. In the hinterland. Head north  via Bruce Highway, passed Woombye, over Diddillibah Road, towards Nambour; left and below the Wappa Dam, but not as far as Gheerulla – though the Gheerulla Falls are in the park.  Got it? Bee-uty!

And we think Maori place names are tongue twisters!

Of the seven women – five experienced trampers, one 10 years younger than me and in training for an impending endurance challenge – I was the baby of the group; on a gold card, I hasten to point out. Give in? To my peers?   More than my life was worth! With no life insurance, that’s not much.  I hadn’t even told the kids I would be in the middle of nowhere; let alone Australia! Apart from the fact I have barely walked more than three kilometres in a day – and that’s on the beach – a 10-kilometre hike; uphill and down gully is not exactly what I had envisaged. Going up into the hinterland invariably means going down at some point.  Or, as one seasoned hiker in the party advised at a tricky part:  going down usually means going up. This was about halfway through the three-point-turn goat track to Gheerulla Falls. Which, as it turned out, have been dried up for some time.  Still, it was on the path to the exit – somewhere.

The drive from Maroochydore to Mapleton was picturesque. It was just that the start of the walk didn’t entirely boost confidence. Camp leaders couldn’t decide at which point to enter the park.  There are several entries, walks of varied lengths and degree of difficulty, not to mention some uncertainty as to the exit point and where to leave the cars.  It required constant map reading – according to the male map-reading encyclopaedia; not a woman’s best attribute, apparently.  But what the heck.  Girls can do anything, right?  Just follow the leader I figured.  Tail-end Charlie is my second name after all – bestowed after a cycling holiday in France with another equally intrepid group of adventure seekers.  By comparison – at least that tour mother knew the route.

Needless to say – and without boring you about the chatter of leeches and giant mossies; 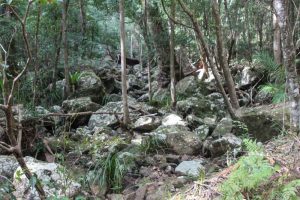 prospect of snakes and tripping over boulders in the dried up Gheerulla Falls, I can – hand on heart – say that I knocked the blighter off!

Dare I admit, even felt a wave of achievement – proving the adage:  nothing ventured, nothing gained.  I gained insight, admiration, awareness and absolute gratitude that when you put a bunch of women together for a day, one thing binds them: Support, laughter and an unwavering appreciation of being alive – 70s’ something and still able to tackle a five-hour hike in the hinterland.

Will I do it again?  Probably not! But ask me again after I turn 70!

Bought in the 80s and donated to Mapleton by Linda Garrett, the park was gazetted 1994. Apart from the tracks, it is undeveloped; some 44.6ha protecting a significant tall, wet sclerophyll forest. This is dominated by blackbutt, turpentine, brush fox and flooded gum – a habitat for two endangered frogs, wallabies and bird life. Leeches an unwelcome by-product!